When Kyle Slidell moved to Boston, MA for work, he didn’t expect to develop a Massachusetts-sized crush on his neighbor, Tobias Rogan. After watching Tobias with occasional hellos for a few months, Kyle is thrilled to learn that Tobias is into him, too.

But Tobias isn’t what he seems, and neither are most of the rest of Kyle’s neighbors. Kyle finds this out too late, when one of the neighbors turns out to be a rogue werewolf who attacks Kyle. And it turns out Kyle’s other neighbors are also werewolves, Tobias is their Alpha–and now Kyle is a werewolf too, and Tobias’s mate! But, being as stubborn as he is, even in wolf form vegan Kyle refuses to eat meat.

The werewolf world is not a calm place, as Kyle learns. Some local wolves have a grudge against Tobias. And Tobias has attracted attention beyond the Boston limits from those who want to make sure he never poses a threat to them. Together, Kyle and Tobias build a life together while fighting to protect their pack and each other.

Real Werewolves Don’t Eat Meat is currently a 5-book male/male romance series, originally published between 2011-2014, being rereleased in 2022-2023. Books 1-3 are from Kyle’s point of view; books 4 and 5 are from Tobias’s. Additional books are tentatively planned, since Kyle talks a lot and Tobias has informed the author that their story didn’t end where she thought it did. 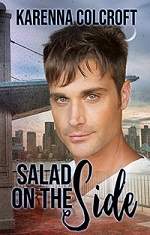 Salad on the Side

Since moving to Boston, Kyle Slidell has met only a few of his neighbors, including Tobias Rogan. Kyle is very interested in Tobias, and is ecstatic to learn Tobias wants him too.

But his neighbors have a secret: They’re werewolves, and Tobias is the pack Alpha. When one of the wolves attacks Kyle in the neighborhood garden one night, Kyle learns the truth in a hurry. Now he’s a werewolf too–and since he’s vegan, he refuses to eat meat.

With Tobias’s help and love, Kyle must adjust to his new life and protect himself and his friends from a rogue wolf with a grudge against Tobias.

Author Anthony Avina gives Salad on the Side 5 stars and says, “Heated, engaging, and thrilling, author Karenna Colcroft’s “Salad on the Side” is the perfect first novel in the Real Werewolves Don’t Eat Meat series and a brilliant LGBTQ-driven supernatural romance novel.”

Joyfully Jay gives Salad on the Side 3.5 stars and says, “Overall, I think this is a great selection for people who love werewolf stories.”

Bayou Book Junkie gives Salad on the Side 3.5 stars and says, “With plenty of subplots and secondary characters included in Salad on the Side, I’d recommend this book to fans of shifter romances looking for a new series.”

MM Fiction Cafe gives Salad on the Side 4 stars and says, “Seriously though as quirky as the title suggests, this story is quite a page turner.  It has all the wholesome ingredients of a good novel.”

TTC Books and More gives Salad on the Side 4 meows and says, “This story is a fun, unusual take on werewolves. Especially with one that is vegan. I liked some of the characters, disliked others (in a good way).” 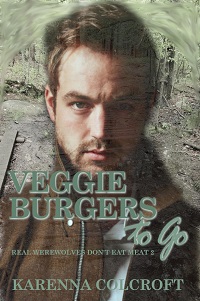 A member of Boston North Pack is attacked by humans who say they were hired by a werewolf. The same night, Melia, the wolf who changed Kyle, returns to Boston. The pack suspects Melia of arranging the attack, but Kyle believes someone else is behind it. He just doesn’t know who.

The next day, at the regional Alpha meeting (or “Alpha-con,” as Kyle calls it) in Pennsylvania, Kyle finds the answer. Saul Hughes, another Alpha, has long-standing issues with Tobias, made worse by Tobias claiming another man as his mate. Saul claims Tobias is too weak to lead a pack, and makes it clear that he wants control of both of the Boston packs. But no one can guess how far he’ll go to get it.

When tragedy strikes at the gathering, orchestrated by Saul, Kyle is left to fight for his pack and mate while Tobias fights for his life. Boston will never be the same

TTC Books and More gives Veggie Burgers to Go 4 meows and says, “I’m anxious for the next book, as I’m loving this series.”

A six-year-old human child, who recently moved with his father to the heart of the Boston North Pack’s territory, is missing, and Tobias Rogan has been framed for his kidnapping. Only Kyle Slidell knows that Saul Hughes, the rogue former Alpha who caused devastation and was stripped of his rank, at September’s regional Alpha meeting, has arrived in Boston to finish what he started with Tobias–beginning with taking the child.

Saul has retained the power to compel others, a power usually held only by alphas, and uses it to cause the other Boston wolves to forget his presence in the city. But Kyle is immune to compulsion and knows the truth. Now if he could just convince everyone else…

To save the boy and protect Tobias, Kyle will violate shifter law, ignore direct orders from the rule of the Northeast Region wolves, and risk his own life. Will he succeed?

As he and his mate Kyle Slidell prepare to travel back to Pennsylvania for the twice-yearly regional Alpha gathering, Tobias Rogan can’t shake the sense that something is going to go horribly wrong. He wants to believe it’s only because of the tragedy that occurred at the last gathering, but deep down, he knows that isn’t all. His fears are proven correct when a visiting wolf from another region challenges Zane Wolfskin, Arkhon of the Northeast Region, for the rank and power to rule the Northeast–and defeats Zane in a fight clearly orchestrated by someone more powerful.

Tobias and his allies learn that the challenge is part of a larger plan to take control of the entire country out of the hands of the alphas and arkhons, and Tobias will not allow it to happen. But the only way to prevent it is for Tobias himself to challenge and defeat the new Arkhon. Tobias never wanted to rule a pack, let alone an entire region, but with the future of all the Northeast Region packs at stake, he has no choice.

Tobias Rogan never wanted to rule over anyone, but in the past several months has gone from quietly running the smallest werewolf pack in the United States to ruling over the Northeast Region of the country as its Arkhon. Traveling to California for the annual national gathering of all United States arkhons and alphas, Tobias knows the time has come to make his stand. The Anax, ruler of all werewolves in the United States, is acting out of senility and desperation for power to not only destroy the structure of the werewolf world in the U.S., but to start war with the wolves in Canada.

To protect his world, his friends, and his mate, Tobias must challenge the Anax–no matter how little he wants the rank. But Tobias’s mate, Kyle Slidell, is taken captive by the Anax’s men as soon as they arrive at the gathering to blackmail Tobias into dropping his plans. Tobias must choose: Issue his challenge and risk Kyle’s life, or stay silent and risk the Anax declaring war.

And Kyle and Tobias’s “theme song”: