For a werewolf, finding their true mate is one of the foremost goals of their life. With one’s true mate, a new whole is created. Mates are bonded on a soul level, and when a werewolf meets their mate, they know instantly. A werewolf is a whole person on their own, but their mate makes them more so.

In and around Boston, Massachusetts lives the largest werewolf pack in the country, City Pack. Some of the City Pack wolves have found their mates and are living their happily-ever-afters. Others are still searching, and if they’re fortunate and willing to open their hearts, they will find what they seek.

Real Werewolves True Mates is a heterosexual romance series, currently planned as five books with a potential for more. Books 2 and 3 were previously published in 2012 and 2013 respectively, and will be rereleased in 2022 and 2023. Each book features a different couple and is told in alternating third-person point of view. 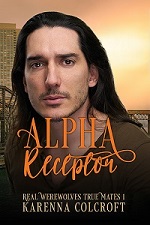 When Lara Jameson’s employer transferred her from Orlando, Florida, to Boston, Massachusetts, moving wasn’t as simple as just finding an apartment. As a werewolf, Lara also had to transfer to a new pack. And when she met Chal Torres, the Alpha of City Pack in Boston, she knew she had found not only a new pack but her mate.

Chal Torres has resisted love since a dominance fight shortly after he was changed resulted in the death of the woman he believed he loved. Now, as Alpha of the largest pack in the United States, he allows no one close to him out of fear they might be used against him. But when Chal meets Lara and recognizes her as his mate, his resistance is no match for the call of the mate bond and of his heart.

As Chal and Lara begin to build their relationship, Chal lets down his guard. But an attack on Lara during the pack’s hunt night and the reveal of a plot within the pack to take down Chal as Alpha lead Chal to begin putting up those walls again. Will he let Lara in, or will his fear end their relationship before it truly starts?

Available on Amazon in Kindle and print formats! 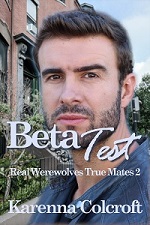 Tareth McConnell has learned not to count on anyone other than herself. She definitely is NOT in the market for a relationship. But the first time she sees the man with the long braid on the subway, she’s drawn to him.

The first time Justin Ruel speaks to Tareth, he knows there’s something special about her. Something that calls to him as clearly as her beautiful voice. If he didn’t know better, he would swear she was his mate–but that’s impossible. Justin is the Beta of City Pack, the largest werewolf pack in the United States, and he absolutely cannot have a human mate.

As their connection grows and they begin to act on their attraction, Justin hides the truth from Tareth. But when a series of attacks on members of the two Boston werewolf packs occurs, Tareth’s life is endangered. To protect her, Justin has no choice but to tell her what he is–even if it means losing her forever.

Available on Amazon in Kindle and print formats!

Jeremiah Crawford’s need for coffee leads to a chance meeting with Trey Damone and his son Mikey. Mikey’s psychic abilities are obvious to Crawford, who wants to help the child learn to manage his powers. And Trey’s need for someone to care about him and his son is even more obvious.

Trey Damone brought his son to Boston to escape Mikey’s mother’s family–a cult-like group who want to take Mikey away from Trey because of Mikey’s psychic powers. Trusting his new neighbors wasn’t easy for Trey. Trusting the man he randomly meets in Dunkin Donuts will be harder, especially when Trey isn’t only keeping Mikey’s secrets anymore. He has a secret of his own now; a month ago, he was changed to a werewolf while trying to save his son from kidnappers. And the neighbors he struggled to trust are werewolves too. If Trey tells Crawford the truth about himself without his Alpha’s permission, the penalty could be death.

Crawford hates secrets, even though he’s keeping one of his own: His employer is a sorcerer. And while Crawford’s life isn’t at risk if he tells Trey the truth, he won’t betray his boss. He trusts Trey and wants to earn Trey and Mikey’s trust, but can he and Trey build a relationship based on the secrets they have to keep?

Releasing March 9, 2023 on Amazon for Kindle and in print! Stay tuned for cover and links!